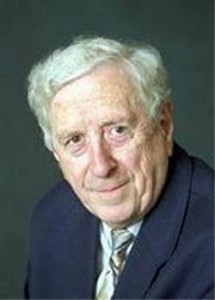 I want to express my sincere sympathies to the family and friends of the late Garret Fitzgerald. Ireland has today lost a great political leader and intellectual voice.

Throughout 1970s and 19080s Dr Fitzgerald played a huge role in Irish politics at a time which was testing in both political and economic life.

Garret FitzGerald served two terms as Taoiseach. He was first elected to Dáil Éireann as a Fine Gael TD in 1969 after previously serving in Seanad Éireann, to which he was elected in 1965. He served as Taoiseach from July 1981 to February 1982 and from December 1982 to June 1987. He negotiated the Anglo-Irish Agreement, ensured the Irish economy was put on a strong and stable footing and was a moral counter balance to the flawed Haughey years.

It is a testament to his leadership and personal qualities that he was able to bring together such a diverse group of people under the umbrella of one political party, from the likes of Gemma Hussey & Nuala Fennell to Paddy Cooney and Oliver J Flanagan, utilising all their skills on behalf of and for the better of the country.

His crowning achievement in my opinion is that of moving the Irish political system with regards to Northern Ireland away from a nasty narrow nationalism to a broader understanding of how we live on this island.

His initial work on the 1970’s Sunningdale Agreement as Minister for Foreign Affairs along with the Anglo Irish Agreement and the All Ireland Forum of the 1980’s when he was Taoiseach allowed us arrive where we are today with the Good Friday Agreement and Power Sharing.

Garrett was a frequent visitor to Clare and recently spoke in Lisdoonvarna at the Merriman School.

Post political life, Dr. Garret Fitzgerald continued to have a major impact on Irish life. More recently he took a leading part in the second referendum on the EU’s Treaty of Lisbon in 1999, wrote a weekly column for the Irish Times and served as Chancellor of the National University of Ireland from 1997 to 2009.

Ireland has lost a strong political and social voice today. Dr Fitzgerald was both a scholar and a gentleman. His legacy is one of high honour and decency in public life. The Queen’s visit this week would not have been possible were it not for the groundwork laid down by people like Garret Fitzgerald. He had a deep sense of belief and conviction that Ireland would emerge a stable and peaceful country. Dr Fitzgerald amde an extraordinary contribution to the Ireland we have today. Ar dheis De go raibh a h-anam.