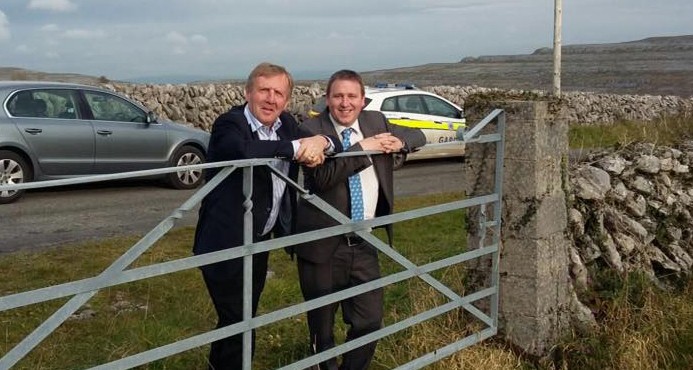 MORE than a hundred Clare farmers have availed of low interest loans from the Strategic Banking Corporation to pay down more expensive forms of short-term debt.
Responding to Clare Fine Gael TD Joe Carey, Agriculture Minister Michael Creed confirmed that the average amount borrowed was €32.704 at an interest rate of 2.95 per cent and  57 per cent of the loans were for three years or more.

Deputy Carey, who is chairman of the Oireachtas committee on rural and community affairs, had asked Minister Creed of his plans to provide for the introduction of low cost loans for farming enterprises to fund both ongoing working capital requirements and on farm investment.
Stating that one of his priorities was to address the impact of the volatility in the sterling exchange rate and lower commodity prices, the Minister said that lower cost finance was an effective way of doing this. The Government had developed the “Agriculture Cashflow Support Loan Scheme” with the Strategic Banking Corporation of Ireland (SBCI) to provide low interest loans to farmers.
Administered through AIB, Bank of Ireland and Ulster Bank, the scheme provides farmers with a low cost, flexible source of working capital, allowing them to pay down more expensive forms of short-term debt, ensuring the ongoing financial sustainability of viable farming enterprises.
Up to the end of August, there have been 3,920 loan drawdowns amounting to €128,199,316. This is an average loan amount of €32,704 with 57 per cent of the loans are for terms of three years or more. The participating banks have advised that all of the remaining €150 million is committed and is in the process of being drawn down.
Minister Creed told Deputy Carey that he was pleased at the very positive reaction by farmers to the Scheme, which has proved that significant demand exists for low cost flexible finance.
He added that he had met with the Chief Executives of the participating banks to discuss this and other access to finance issues relating to the agri-food sector.
“I believe this Scheme demonstrates the importance of lower cost and more flexible finance as a response to competitive pressures, and I hope that it will be a model for possible future measures,” Minister Creed concluded.

ABOVE: Minister Michael Creed with Deputy Joe Carey on a recent visit to North Clare