Clare TD Joe Carey has paid a warm tribute to the Clarecastle and Ballyea Heritage and Wildlife Group and a local family for their “wonderful work” in bringing some of the county’s rich history “back to life”.

Deputy Carey was speaking after the local group received the Clare County Heritage Week Award 2020 for its project ‘Clarecastle on film in the 1950s’.

The historic film footage of the then busy port of Clarecastle was captured in colour and black and white film by Anthony Considine, the son of the Clarecastle harbour master.

Welcoming the group’s award, Deputy Carey said: “I would like to warmly congratulate the wonderful work of the Clarecastle and Ballyea Heritage and Wildlife Group – this award is a fitting recognition of the considerable time and effort they put into the project.”

The Clarecastle-based TD also thanked the Considine family for donating the film and “bringing our history back to life”.

The rare footage shot by Anthony Considine shows cargo ships tied to the quay in the early 1950s unloading coal and fire bricks for local merchants and factories. It also shows the army of men and horses used to transport the goods from Clarecastle to Ennis and other towns in the area at the time.

The Considine family gave the film footage to the Clarecastle and Ballyea Heritage and Wildlife Group and has now been digitised for future generations to view and enjoy.

To view the footage, visit: https://clarecastleballyea.clareheritage.org/ 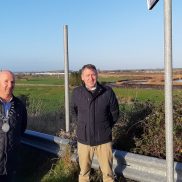 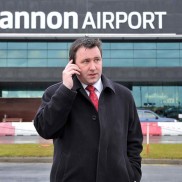