Ryanair’s decision to pull out of Shannon ‘another blow’ for the airport and region: Deputy Joe Carey

Clare TD Joe Carey has strongly criticised Ryanair’s decision to shut down its bases in Shannon and Cork airports for the winter, describing the move as a “huge blow” to the airline’s local employees and the entire region.

Ryanair made the announcement this morning as part of significant winter capacity cuts across the airline’s Irish and European bases.

Responding to the announcement, Deputy Carey said: “This is extremely disappointing news and yet another blow for Shannon Airport.

“Ryanair’s decision will result in job losses at Shannon Airport and will further reduce our connectivity as a region.”

In recent weeks Deputy Carey, who is chairperson of the all-party Shannon Airport Oireachtas Group, has repeatedly called on the Government to adopt the EU’s Traffic Light system and for pre-departure testing to replace blanket restrictions at our airports.

On Tuesday it was announced the Government would adopt the system to replace the Government’s travel ‘Green List’. Deputy Carey welcomed the move, but said it is now essential the Government immediately “implements this policy in full”.

The local Fine Gael TD added: “Its really disappointing that pre-departure testing at Shannon and our other airports has not been rolled out despite the fact that other airports across Europe have successfully introduced such regimes.

“I am looking to hold an immediate meeting of the Shannon Airport Oireachtas Group with our fellow Mid-West TDs and Senators to discuss Ryanair’s decision and to see that every possible effort is being made to keep bases open.” 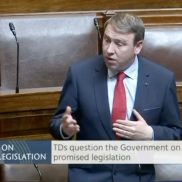 Reasons for Ó Céidigh’s resignation need to be established