Clare Fine Gael TD Joe Carey has suggested that a number of coastal walks in North and West Clare could benefit from the remarkable success of the Wild Atlantic Way marketing initiative.

He was speaking in the context of a response he received from Fáilte Ireland in which the tourism development authority said that a feasibility study into developing a Wild Atlantic Way coastal path showed there was strong economic value for rural communities from such a proposal.

“I believe that there can be a significant tourism dividend for communities all along the Clare coastline. While areas such as the Cliffs of Moher, Fanore, Lahinch, Spanish Point, Kilrush, Quilty and Kilkee are well known, there are other areas of spectacular natural beauty that could bring the Clare coast to an even bigger international market,” he said.

The response from Fáilte Ireland followed a parliamentary question from Deputy Carey who asked Tourism Minister Shane Ross about plans for a Wild Atlantic Walkway and the potential impact it could have on tourism in rural areas.

In her reply to Deputy Carey, Fáilte Ireland Information Manager Mary Penny said it was a strategic objective of the tourism authority to complete a full feasibility into the development a Wild Atlantic Way coastal path. The first stage of this work was a pilot study to look at linking the existing Kerry Way and Dingle Way routes.

“Early indications from this study show that there is strong economic value to rural hinterlands for developing long distance iconic walks.

“Such walks significantly increase dwell time in destinations which, in turn, drives economic growth. The output of the pilot study requires further consumer research into coastal walks and visitor needs to inform the next steps in the feasibility study, particularly in relation to the quality of the trail and proximity of the coast. This work is ongoing.

“We have also commissioned a journey review of the Wild Atlantic Way driving route which is looking at the entire Wild Atlantic Way. A report of the review is currently at draft stage. Fáilte Ireland plans to consult with each local authority along the route to discuss and agree all the recommendations made in the review. This work is scheduled for completion by the end of August,” Ms Penny concluded. 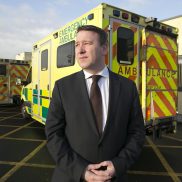